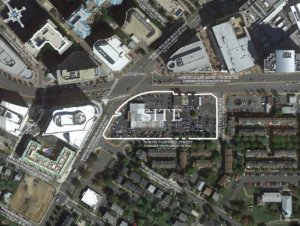 The site, acquired by Saul in multiple transactions totaling roughly $46 million, is currently home to Rosenthal Mazda, an Enterprise Rent-A-Car office and trailer, and surface parking lots. Enterprise has locked down a home on the ground-floor of the new building, per Arlington staff.

The proposed building features up to 12 stories of concrete construction forming four distinct “buildings” designed by David M. Schwarz Architects Inc. While the buildings will be connected and managed as one entity, they will be differentiated by separate architectural schemes.

Building 1, the largest and tallest of the four, is designed in the Art Deco style. It the length of the Wilson Boulevard frontage and wraps around the corner with North Glebe.

Building 2, spanning North Tazewell street, is a four-story structure appearing as garden-style apartments, to match the scale of the townhouse development across the street.

Building 3, fronting North Glebe, is described as the Art Moderne style. Stepping down from 12 to nine stories, it will feature a “cylindrical turret element.”

Building 4, a seven-story structure at the corner of North Glebe and Seventh Street North, will offer more glass, wider balconies and “buff-colored brick.”

The Arlington staff report lays out the county’s priorities — to minimize the impact of large curb cuts on Seventh Street North, to provide for pedestrian movement east-west through the block, to break up the long building expanse at Wilson and North Glebe (“more relief from the building bulk”), to create “residential form and function” along North Tazewell, and to introduce more publicly accessible open space to the block.

The Bluemont Civic Association, in its October newsletter, took issue with the proposal, noting “there has been no public pressure from staff to require better access and circulation within the block,” and questioning the “exceptionally low traffic assumptions” for the planned grocery store.

“In short,” according to the newsletter, “virtually none of the BCA’s requests contained in the resolution members passed at the June Annual Meeting were met in Saul’s revised plans.”
The Saul proposal is much larger than what the current zoning for the site allows — 122,125 square feet of commercial or hotel, or 13 single-family detached homes — and far more than even the zoning category that Saul seeks would provide. The developer has asked for bonus density, which it will achieve by building to a LEED Gold standard, by obtaining Energy Star certification, and by providing affordable housing.

Arlington staff may struggle to decide what’s best for the site, given, in its own words, “the lack of detailed, recent policy guidance for the west side of North Glebe Road, and the scale of the proposed project.” The area is still largely ruled by the 1980 Ballston Sector Plan and a 1989 study on the Rosslyn-Ballston corridor. Wednesday’s SPRC meeting on the project is the first of as many as eight before it moves to the Arlington Board.

The Most Important Real Estate Statistics from 2016