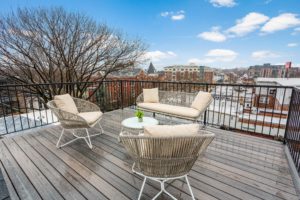 American University is one of the many landmarks of the Washington DC cityscape, bringing nearly 15,000 students into its hallowed halls. These bright minds enrich themselves on one of three main campuses that stretch across the Northwest quadrant of Washington DC, either living in on-campus housing or in apartments, condos, and nearby homes.

This year, however, it is likely that more students than usual will be looking for somewhere to live off-campus. American University recently informed its enrollees that student housing would be limited to single-occupant dormitories, in order to comply with social distancing recommendations. Furthermore, priority for these dorms would be given to first-year and transfer students, with sophomores getting second dibs on any remaining rooms. This is a large adjustment from their traditional policy of ensuring two years of on-campus housing to any students who want it.

All told, these dormitories will be available to somewhere around 2,300 American University students — but what about the other 12,000 attendees?

Luckily, American University is in a thriving and vibrant metropolis, so there are plenty of great options in nearby neighborhoods for students to live!

The neighborhood lies directly north of American University’s primary campus, along the Northwestern edge of Washington DC. To the west, American University Park marks a border between the District of Columbia and the state of Maryland.

American University Park is laid out in a way that creates a tight, communal atmosphere. Many of the homes do not feature full length driveways and sit on shady, tree-lined streets. This layout gives a sense of tranquility without cutting residents off from the conveniences and local entertainment of DC.

The most prominent landmark — and namesake — of Cathedral Heights is the Washington National Cathedral. This Episcopal cathedral, bearing the full name of the Cathedral Church of Saint Peter and Saint Paul in the City and Diocese of Washington, is one of the most prominent features of the local skyline. As one of the largest buildings in DC, and one of the tallest church structures in the nation, residents are sure to be awestruck at the neo-gothic majesty of the cathedral in their backyard.

If you are looking for somewhere to live that offers several different housing options, all with a twist of historical beauty and convenient access to American University, then Cathedral Heights might be the perfect choice for you.

Sitting to the north of American’s main campus, Tenleytown is a great option for students who want convenient access to both American University and the rest of DC. Like much of Northwest DC, Tenleytown is characterized by detached, single family homes, often in a colonial style. However, the neighborhood is starting to become the premier scene for new condos in DC as the neighborhood has seen an increase in condominium development over the past few years, with new luxury condo properties in Tenleytown cropping up.

Like Cathedral Heights, Tenleytown bears a throughline of historical significance. The neighborhood, which marks the highest elevation in the District of Columbia, is also the site of now-defunct Fort Reno. This military entrenchment was constructed in the winter of 1861, the first year of the U.S. Civil War, after the Union Army faced defeat at the First Battle of Manassas. The fort and surrounding sites served a role in the Battle of Fort Stevens, the only skirmish of the Civil War that touched the District’s soil. Today, Fort Reno is one of the DC area’s beautiful parks, with plenty of spaces of recreational activity and an entertainment venue.

Even for those residents who care little about the historical significance, Tenleytown has an undeniable allure. The neighborhood is also the site of the nearest metro station to American University, the Tenleytown-AU Metro Station. This means that people who choose to live in the neighborhood have convenient access to the rest of DC — as well as Arlington VA and Alexandria VA — by way of the Red Line. Residents can, therefore, cut down on time spent in DC’s famously frustrating traffic!

To make it even better, American University traditionally operates a shuttle between the Tenleytown metro stop and their campus, so you can get back and forth between the two with ease.

Of the listed neighborhoods, Woodley Park is the farthest from the main campus of American University. It is a larger neighborhood, sitting to the southeast of AU. Unlike many of the more northern communities, which feature a lot of detached housing, Woodley Park offers the traditional DC row home as its most notable style.

In fact, although the areas surrounding Woodley Park — like the northern stretch of Connecticut Avenue — have been redeveloped to high-rise apartment buildings, the well-preserved Woodley Park still features the classic row home. This, combined with the relative tranquility afforded by the tree-lined streets, makes Woodley Park a wonderful option for American University students looking for off-campus housing.

But, if the neighborhood is so much farther out, why include it in this list? Well, Woodley Park exists as a sort of gateway between the northwestern extent of DC and the other quadrants of the District. Woodley Park has gained a reputation for having a more active nightlife than some of the sleepier neighborhoods of NW DC, and the recent addition of a shuttle bus that runs into the entertainment heart of DC means that residents can quickly and easily get to where the action lives.

On top of that, Woodley Park has its own metro stop, the Woodley Park-Zoo/Adams Morgan Station, servicing the Red Line, which allows residents to enjoy everything the DMV has to offer. And, as the metro stop name belies, people living in Woodley Park have premium access to the DC Zoo, with all of the beauty and majesty therein!

No matter where you choose to live near the American University campus, it’s important to make sure that you are getting the best deal possible. A lot of university students are interested in living in Washington DC on a budget, and housing can often be a big cost in the hot real estate market of DC.

That’s why, no matter the decision that you make, it’s important to work with real estate professionals who can help you get the best possible deal! At the Keri Shull Team, we specialize in helping you find the right property for sale or for rent and making sure that your offer is the most compelling, without necessarily being the most money.

So if you are ready to take the next step in finding the perfect off-campus home, then you need to contact the Keri Shull Team today! Our expert agents are standing by to help you, so just click here to schedule a time for a free consultation to determine your needs!

Don’t Stand to the Left! 8 Tips for Relocating to the DC Met…